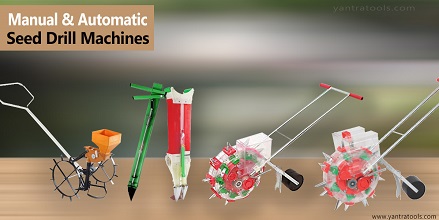 The introduction of the seeder machines has enabled many farmers gain confidence in their profession with the increase in the production of crops in less time in most of the parts of the country. These machines can easily be operated by the farmers as per their requirements.

Modern day technology has upgraded every corner of an economy. From an industrial nation like Britain to agricultural country like India, we can witness a sea change in all kinds of works that include high level of labour, intelligence and strength. Machines have not only taken the place of men but also have generated high speed in work, thus increasing all sorts of output.

Agriculture being a primary profession for most of the developing countries’ people, machines are curving their own niche in this field with the changing time. A lot of varieties are coming up in order to help the process involved in the cultivation of different crops an easy one. Seeder machine is one such machine that is used in the initial step of the cultivation. This machine helps in digging the soil and positioning of the seeds in the perfect way so that they are evenly distributed and at the right depth to grow into a healthy crop.

Right from the days of the birth of agricultural system, the seeds are being sown by the farmers with their hands. The farmers at first dig soil and then make furrows with the help of the traditional devices and then drop the seeds. This Traditional seeding process overall requires time as well as labour.

There are a lot of problems faced by the farmers in the traditional seeding process. Some of the major issues are:

Most of the parts of a country like India is still using conventional methods of irrigation that is farmers are irrigating by their hands and not using the modern machines in the system.

Lands under irrigation are not properly distributed and the sizes are reducing in measure from time to time. It becomes difficult to irrigate smaller holdings properly.

High yield of crops can only be attained with good quality of seeds being sowed into the soil for irrigation. The rise in the price of the seeds has kept the marginal and small farmers away from them.

4)    Lack of manures and fertilisers

Manures and fertilisers act as the energy that run down to every part of the seed to help it grow into a healthier crop. Good soil can give birth to good crop and this can be done by the increase in the use of manures.

The well build modern-day seeding machine has enabled the farmers to irrigate faster and in a better way. The seeds are well placed by the machines. This helps in better irrigation as the well placed seed is able to receive air, water, and fertilizer properly to grow perfectly in shape and size.

With the use of this hand tractor kind of seeder machine, one can sow the seeds without bending with their hands. It is a long lasting machine that is made up of heavy metal.

Multi seed planting machine is helpful in planting seeds at the correct depth and order. It can be easily operated by the farmers.

This enables to drop seeds as well as the fertilizers in the soil. The seeder machines save time as well as a lot of labour.

High labour cost is reduced to a great extent with the help of these machines. It can cover 8 rows of 20cm in size at a time. Thus saves a lot of time.

Benefit of the Indian farmers and Indian economy from the seeder machines:

The Indian agricultural sector is developing at a faster rate with the mechanical system being introduced in the farming sector. It has not only enhanced the speed of the irrigation process but also has enabled the farmers to get better amount of products, superior in their quality. India being an agricultural nation, seeder machines are essential in helping farmers go with the rest of the world. It has made them much more confident in their approach and there is a subsequent improvement in the level of production, which is overwhelming.

The Indian soil has been irrigated for thousands of years now and the introduction of these machines have helped to improve and maintain the necessary amount of production needed to satisfy the economy’s need.